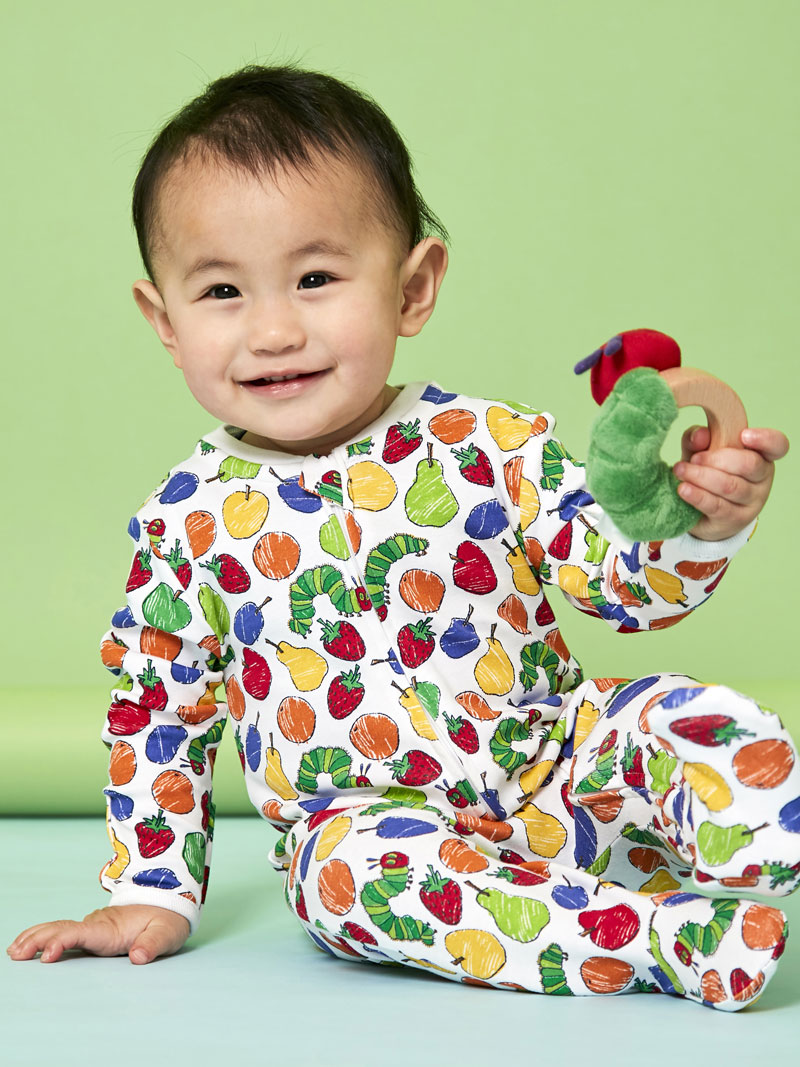 Leading nursery retailer, JoJo Maman Bébé has partnered again with the World of Eric Carle to extend its successful Very Hungry Caterpillar range of children’s clothing based on the evergreen book character.

The licensing campaign for The World of Eric Carle’s The Very Hungry Caterpillar is managed in the UK by independent licensing company Rocket Licensing through the worldwide agent, The Joester Loria Group.

Launched on 27th July, 2020, the second phase of the JoJo Maman Bébé and The Very Hungry Caterpillar partnership builds on a very successful initial range which launched in 2019. The new, extended collection features eight very special designs, available in an increased range of sizes, now up to age four and including toddler sizes.

The designs carry the signature JoJo Maman Bébé stripes, coupled with cute phrases from the world’s favourite caterpillar, such as ‘hungry, hungry, hungry’ and ‘tiny and very hungry’, and  lovely appliqué, embroidery and prints feature to truly capture The Very Hungry Caterpillar brand. Iconic images from the Eric Carle book are used to create individual and instantly recognisable pieces including rompers, baby grows, jogger and T-shirt sets, and dresses.

Also new to the range are two additional Very Hungry Caterpillar gift box designs, to help create the perfect gifting opportunity. The collection will be supported by a heavyweight social media campaign, as well as a central in-store display unit, and will be accompanied by other Very Hungry Caterpillar products including toys and books to provide an immersive brand offering to JoJo Maman Bébé customers.

Melissa Satterly, Brand Manager for The Very Hungry Caterpillar at Rocket Licensing comments: “The initial range from JoJo Maman Bébé last year was so well received, that it was only right to extend the deal for a new season, and we’re thrilled to be expanding the offering with this best-in-class partner.

“The momentum with consumers created during The Very Hungry Caterpillar’s 50th anniversary in 2019, is continuing apace and we will soon be announcing more partnerships for the beloved Eric Carle property.”

The Very Hungry Caterpillar is the centrepiece of the successful global licensing campaign around The World of Eric Carle brand, which brings together the much-loved, multi-million-selling works of author and artist Eric Carle.

December 23, 2020
Clothing
Brand-new into its ever-popular Izzy and Oliver collection, Enesco is proud to announce the addition of a super-cute yet totally practical range of baby...

Hugo & Me’s search is on for Britain’s cutest baby

December 1, 2020
Clothing
Mount Maunganui based maternity & nursing lingerie company, Hotmilk, has just celebrated their milestone 15th birthday. Since 2005, a team of mothers (and a dad...

Bravado Designs to Launch on ASOS

May 21, 2020
Clothing
Platinum award-winning maternity and nursing lingerie brand, Bravado Designs, is thrilled to announce it will be launching a variety of its best-selling styles on...