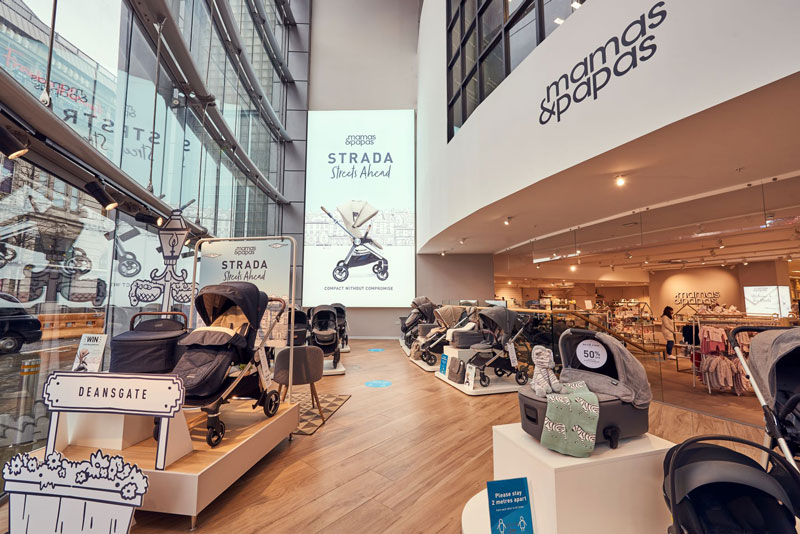 Nursery retailer heralds “landmark year” thanks to booming sales in its online business and Next concessions.

Nursery and childrenswear retailer Mamas & Papas said sales over the 8 weeks to 26th December were up 30% on the previous year and 35% on 2019, buoyed by new store openings, new product launches and an enhanced online presence.

Thanks to positive Black Friday and Christmas trading, current year sales (to end of December) are up 32% on the prior year, with profit (ebitda) more than double.

The Huddersfield headquartered company, which operates 22 standalone stores, said the performance of its online business had played a major role, whilst its new Next concessions were trading ahead of plan. The company opened its 12th concession with Next in High Wycombe in December and has opened 10 in the past year.

In its latest set of annual accounts for the 12 months ended 28th March 2021, the retailer reported sales of £93.1m and profit (ebitda) of £4.7m, which it said marked an historic turnaround following several loss-making years. It said a number of cost reduction measures – as well as innovations across its stores, product ranges and online business – had helped to restore profitability.

More than 38% of sales by volume now come from its overseas operations, which includes 20 franchisee stores across the Middle East and a network of distributor partners and agents covering a total of 40 countries.

Over the past 18 months, the business has created over 100 new roles to support its expansion, with more planned over the coming 12 months to support its continued expansion. It currently employs around 700 people in total.

Mark Saunders, Chief Executive Officer at Mamas & Papas, added: “We’re delighted with the performance of the business, both over a busy Christmas period and what’s been a landmark financial year to date. There’s real momentum across the business, which is the culmination of a lot of hard work optimising our product ranges, customer service, store operations, property estate, online business andinternational presence.

“I’m particularly proud of our colleagues who’ve worked tirelessly, often in challenging circumstances. Our success is, in large part, down to their efforts and enthusiasm.

“We’ve also been supported by a large and loyal customer base, which continues to expand as we welcome more new and expectant parents into the Mamas & Papas family.”

Infantino gets Played in Chelsea

Hippychick announce their 2022 charity of the year

Be Eversure you made the right choice with Graco

Why parents are waking up to eco-friendly weaning options

The Entertainer ready to re-open on Monday

April 9, 2021
News
The Entertainer confirms April 12 re-opening for England and Wales with dedicated Quiet Hours for those wanting a quieter shopping experience Lockdown restrictions for retailers...

March 10, 2022
Exhibition News
Harrogate International Nursery Fair has announced the permanent move to an October show with dates confirmed until 2024. The 2022 event will take place...

March 28, 2022
Eco
British nursery brand Silver Cross unveils its brand new next generation travel systems to the world this month. At the forefront of intelligent and sustainable...

The Daddy Sleep Consultant has arrived!