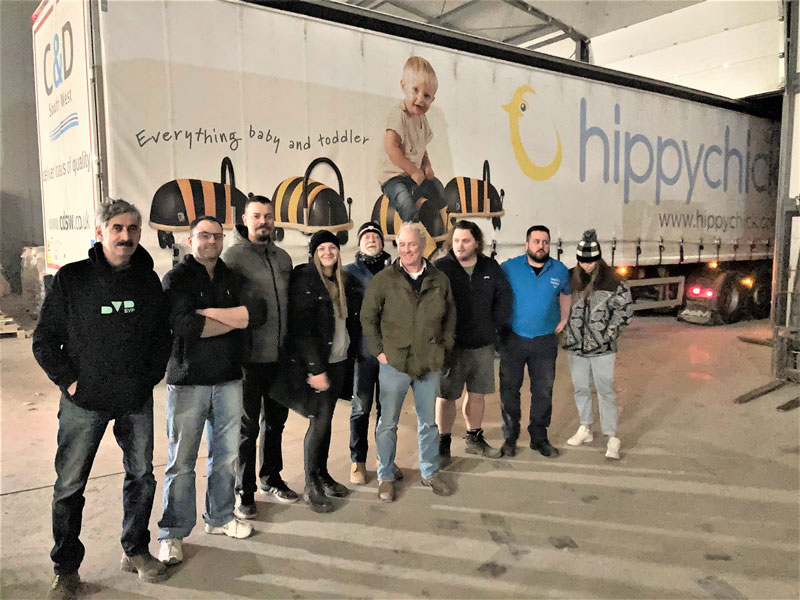 Hippychick would like to thank everyone for their generosity in supporting its recent initiative to transport essential supplies to Poland for distribution at the Ukrainian borders.

The nursery & toy company’s joint managing director Jeremy Minchin volunteered to drive a loaded company vehicle to Poland with others. The items taken were a mixture of goods given directly to Somerset-based Hippychick, and the Compass Centre in Taunton, and other local organisations.

He said: “It was a hell of a long drive but with two drivers for the lorry (kindly donated by Haybirry Haulage and C & D South West) and the two for the van, we were able to keep going without any significant stops. We left on Saturday March 12 and were back on Tuesday March 15, having completed a 2,600-mile round trip in over 72 hours.

“It was a huge relief to have made the best possible connections through an old ex-Marine friend who is a trustee for RE:ACT : an emergency crisis response charity specialising in getting direct humanitarian aid in the fastest time for those who are hard to reach, and most vulnerable.

“Alongside and in conjunction with RE:ACT, we met members of a Ukrainian charity called Ukraine Education in the town of Rzeszow, which is about 45 minutes from the Ukrainian border and two hours from Lviv. Ukraine Education focuses on educational matters but has rapidly adapted to the war situation and now provides humanitarian aid for displaced persons.

“In Rzeszow, we were met by a 27-year-old woman and an older man from Ukraine Education on the edge of the town. All Ukrainian men aged 18 to 65 have to fight, so all this work has to be done by women, or men aged over 65. They had driven from Lviv (a two-hour drive from the border) where there are a huge amount of people flooding in from eastern and central Ukraine. They have shelters and reception centres for people. Everything from our van and lorry was unloaded into a warehouse (which had been donated by a building company) and some of the more urgent medical equipment, generators and sleeping bags were taken to Lviv on Sunday night, with lots more poised to be taken forward into Lviv. It’s estimated that around 60,000 refugees per day will be arriving in Lviv over the coming days.

“It becomes very real when you realise that everything has had to be put together in Poland with no notice and, inevitably, there are not huge, perfectly kitted-out warehouses in the exact location. The potential for chaos in these situations is high. I can tell you with confidence that everything will get to where it’s most needed within a short space of time, rather than stockpiling in Poland – which is already happening and is bound to become a bigger problem.

“A significant aspect of this trip is that we have helped to establish a tested and effective conduit for delivery of humanitarian aid between RE:ACT and Ukraine Education. This logistical structure will enable any further aid donations to flow swiftly to those who need it most.

“The palpable gratitude from all Ukrainians we met for the support and humanitarian aid was clearly evident and very humbling. That the populations of European countries are standing beside Ukraine with humanitarian, economic and military defensive support, clearly means the world to them.

“We met a Dutch couple at a service station in Poland who had just collected their daughter-in-law and grandchildren from the border. It was heartrending to talk to the daughter-in-law about having to leave her home in Kharkiv, and her father having to stay behind and fight, when he had had no connection with anything military until two weeks ago.

“Thank you again to everyone who made contributions. On the back of this trip, we are going to continue to support the delivery of humanitarian aid via RE:ACT and Ukraine Education.”

December 11, 2020
News
Nursery brand donates £20,000 to charity Alongside its successful Black Friday/Cyber Monday promotions, Silver Cross has gone a step further this year to help even...

What Goes on Under the Surface Really Counts

May 17, 2021
Bedding
Snüz unveils a brand-new range of mattresses to provide support where babies need it most. Iconic sleep brand Snüz is excited to launch its range...

June 8, 2022
New Products
Small Fries Games are pleased to announce the launch of Uh Oh! At home, the second game in their series for new-borns, babies, toddlers...

June 9, 2020
Awards
The Joie i-Snug and i-Base Advance have earned the high ranking, “Very Good” ADAC rating for safety as well as a four-star recommendation from...

The SENA aire from Nuna wins a 2021 Red Dot Award