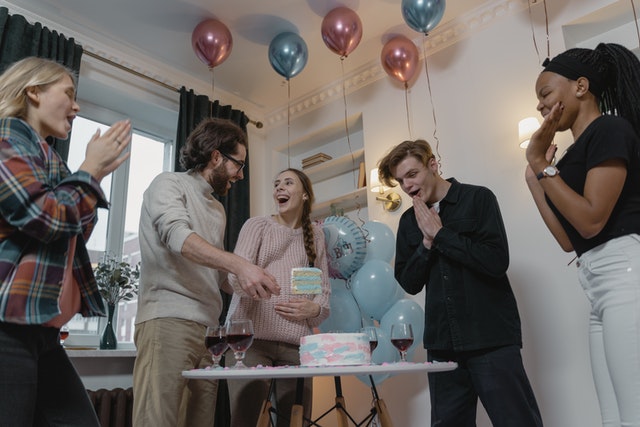 New parents can expect to spend a large amount on different equipment, gadgets, some of which may never be used and last but not least mountains of clothes for the new baby.

The parents to be may want to share their excitement for the expected new arrival with friends and family by arranging a baby shower or gender reveal party, but what can parents expect to spend?

To give an overview into what Brits spend on average for some popular modern traditions, like baby showers and gender reveal parties and what the general perception of these traditions is, life insurance broker, Reassured has polled 1,500 people1.

The study shows that Brits spend the most on gender reveal parties with an average cost of £2,573, closely followed by the cost of £1,994 for baby showers.

Brits spend an average of around £2,000 on baby showers

The study reveals that one primary cost associated with baby showers is gift-giving, with 73% of Brits expecting their guests to bring a present.

Interestingly, 41% of Brits wouldn’t hold a baby shower, and over half (53%) see them as a needless expense. Meanwhile, a further 45% have felt pressured into hosting such an event.

On a financial level, 43% admit they can’t really afford to host a baby shower, with a further 38% stating that they’ve received financial assistance to hold one.

Gender reveal parties are the most expensive modern-day tradition

With people spending a chunky £2,573 on average, the study reveals that 72% of those hosting gender reveal parties say they expect guests to bring presents, with 60% saying it’s a great way to get spoilt by friends and family.

Over half of those surveyed (54%) wouldn’t like one of these events and believe it’s an unnecessary expense. In fact, 51% have felt pressured into hosting such an event.

Given how expensive some of these can get, it’s not surprising that 49% have said they can’t really afford a gender reveal party amongst everything else they have to pay for when having a baby. 53% have said they received financial assistance to have one.

Big city spenders: The cities that spend the most on new traditions

When it comes to baby showers, Bristol is the clear winner, spending a mind-boggling average of £4,229 per event. Next up, Southampton places second with an average spend of £4,039, while those in the infamously expensive city of London spend as little as £2,015.

Lastly, for gender reveal parties, Glasgow secures the top spot with people on average spending £5,661 per gathering, closely followed by Sheffield (£4,161) and Edinburgh (£3,969). Whereas in Norwich people spend a comparatively small amount of £1,000 on average.

A spokesman from Reassured comments on the study: “It is interesting to see people’s general perception of these events and how much some people are willing to spend. When getting married or having children it is always wise to plan ahead. Putting life insurance into place is a cost-effective way of ensuring the financial future of loved ones and as the UK’s largest broker, we are on hand to help make sure you get the protection you need quickly and efficiently.”

To find out more about Reassured you can follow this link: https://www.reassured.co.uk/

Jump into the June issue of Nursery Today

Lansinoh Commits to Climate Neutrality by 2030

March 5, 2021
Eco
Lansinoh, one of the global leaders in breastfeeding solutions and support, has set ambitious new targets that address the company’s sustainability efforts. Lansinoh, whose UK...