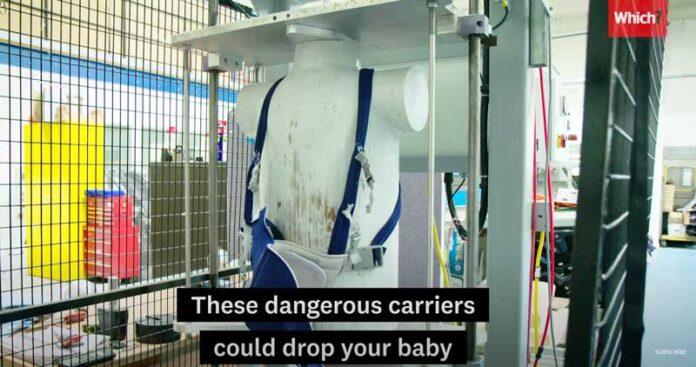 Coming apart at the seams – 91% of cheap baby carriers and slings tested by Which? fail basic safety standards.

Most cheap baby carriers and slings bought from AliExpress, Amazon and eBay have failed crucial safety and durability tests, a new Which? investigation has found.

The consumer champion found significant failings with 10 out of 11 baby carriers and slings it tested, including shoulder straps that fell apart at the seams, leg openings big enough for a baby to slip through, suffocation and entrapment hazards and a concerning lack of instructions in some cases.

Three out of 11 of the products tested failed every aspect of Which?’s product safety tests. The only product that passed was later found to be a counterfeit item.

At least six of the products failed in Which?’s testing of attachment systems, durability or falling hazards. Which? tests this by strapping the baby carrier or sling complete with the weight of a baby onto a mechanical test torso which moves up and down to mimic how a parent or carer would really move. It then checks that the methods of attachment are secure and will not break or move.

In the worst cases, carriers fell apart at the seams and had shoulder straps tear and detach themselves. This could be lethal if this product was used to carry a real baby.

Other concerning flaws in the products Which? tested included leg openings that were too large and could allow a baby to eventually slip through.

Which? also found one pouch sling where the holes in the mesh material were large enough that a baby’s small fingers could push through it and get trapped – a serious safety issue, which in the worst cases could lead to amputation.

Four of the carriers and slings were found to present suffocation risks either from the packaging or bag used to store the product. Any packaging should be perforated or a certain thickness. If the product comes with a drawstring bag for storage, the opening of the bag needs to be too small for a child to put over their head.

Many of the carriers and slings were also described in listings as being suitable for very young children, from newborns up to three years, however Which? experts found that most did not provide adequate support for small infants who will not have the neck strength to hold their own heads up until they are three or four months old. Some provided such poor back and head support that even in the photos on the listings, the person modelling the product is having to hold the baby’s head upright to stop it falling backwards.

Which? ergonomics experts state that carriers should hold a baby’s legs in a supportive ‘M’ shape, so their thighs and knees are not left dangling. However, many of the carriers Which? tested had a very narrow seat base. If the baby’s thighs are not supported to the knee joint the stress on the hip joints could increase the risk of hip dysplasia in babies prone to this. It is also an uncomfortable position for a baby to be carried in.

Ten out of 11 of the baby carriers were also missing crucial instructions, warnings or markings to ensure the products are used safely and correctly. Six came in clear bags with little or no information at all.

Which? is concerned that with so many people struggling financially because of the cost of living crisis, families will be tempted to purchase cheap products from online marketplaces without thinking about whether they could potentially be dangerous.

When Which? flagged its findings to the online marketplaces AliExpress, Amazon and eBay all removed the offending listings, however since this initial investigation Which? has already spotted similar listings back on the sites. This demonstrates that the reactive approach from marketplaces is not dealing with the problem.

Which? believes the government needs to do more to increase checks on products being sold online by bringing in tougher laws and regulations to make online marketplaces legally responsible for ensuring the safety of products offered through their sites. It is not good enough for online marketplaces to take down products reactively when they are flagged by Which?.

Online marketplaces have a responsibility to do much more to prevent dangerous products from going on sale in the first place – and remove them after they have been listed. The UK has some of the strongest safety standards in the world but these are undermined by products that do not adhere to standards and regulations and easily make their way onto marketplaces.

Natalie Hitchins, Which? Head of Home Products and Services, said:

“Parents will be horrified at the thought that they could be unwittingly putting their baby at risk simply by buying a cheap carrier online without knowing that many of these items do not adhere to any kind of legitimate UK safety standard.

“These findings show yet again why online marketplaces need to be given greater legal responsibility to prevent the sale of dangerous and illegal products on their sites once and for all.”

November 25, 2020
News
Multi award-winning JMDA Design, have been announced as one of the elite product design agencies in the world, being ranked 9th in the Red...

The Edit by Silver Cross reveals the Instagrammable nursery trends for...

May 16, 2022
Furniture
A new report from The Edit by Silver Cross reveals Instagrammable nursery style and colour trends for 2022. Using Instagram data, the team have revealed...

July 26, 2021
New Products
Sensory play galore thanks to Kaloo’s engaging Activity Books. Best known for the most charming and comforting toys, the experts at Kaloo are thrilled to...