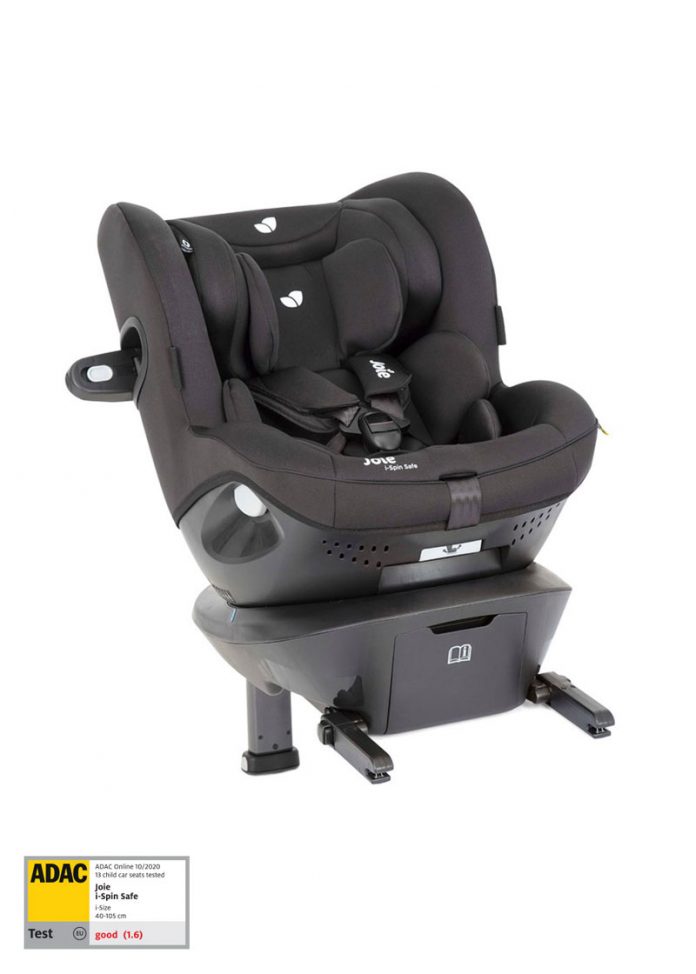 Joie are thrilled to be able to announce that its i-Spin Safe has been awarded the highest ever safety test score for rotating seats from ADAC, Europe’s biggest automobile organisation, as well as a four star rating from OAMTC – on top of being Swedish Plus Test certified.

German company, ADAC is well known for being one of the most important and rigorous testers of child car seats in Europe. Their tests use extreme speed and loads that exceed European Standards so you can be sure that if your seat has scored well with ADAC, it’s one of the safest seats you can buy.

In its latest round of testing, ADAC described the i-Spin Safe as a “very safe seat, in which children up to around four years of age are only secured against the direction of travel,” meaning that this seat is exclusively rear facing.

The i-Spin Safe comes fully loaded with the very best safety features, including the Tri-Protectheadrest featuring Intelli-Fitmemory foam, alongside Guard Surround Safetyside impact protection panels that automatically lock out when the harness is tightened.

Whilst the i-Spin Safeis a safety powerhouse, it doesn’t compromise on practicality. Getting your little one in and out is easy with a smooth, one handed 90o spin, while the Sleepytime Tilt offers six different recline positions so they will always have the comfiest of rides.

The news has also led to the i-Spin Safe earning five stars for safety and a Best Buy status from the UK’s leading independent product review publication!

Joie’s Head of Product Development, Damon Marriott said: “Child safety is of paramount importance to us at Joie, so it is brilliant to hear that this seat has scored so highly with ADAC, as well as being Swedish Plus Test certified. Putting our seats through such rigorous testing gives consumers confidence in our products, so they know that when they buy a Joie car seat, their child will be safe and sound.”

June 21, 2022
Car Seats
Introducing calmi R129 from Joie Signature. Joie is excited to announce the launch of calmi R129 – a first of its kind for the brand....

CarGoSeat is firmly in the driving seat

September 18, 2020
Car Seats
CarGoSeat, the revolutionary new way for families to travel safely and easily, is celebrating a raft of award wins and a coveted slot on...

July 29, 2020
Car Seats
When Lee Knott emailed Bebecar to ask for help the team jumped at the chance especially when they found out it was so he...