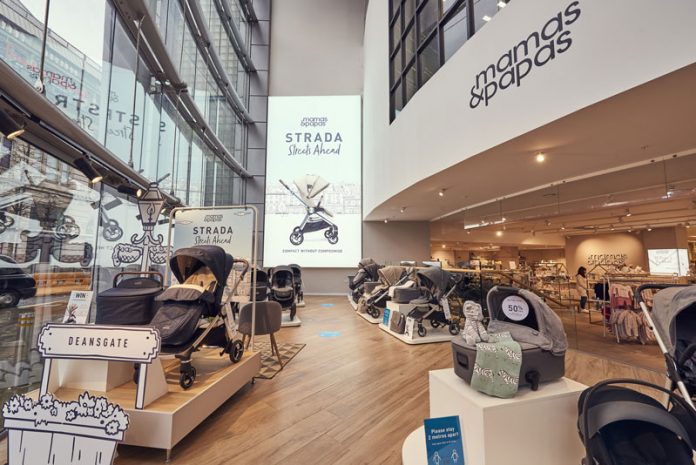 Retailer plans to double exports to Central and Eastern Europe over next year, with more overseas markets planned

Nursery and childrenswear retailer Mamas & Papas is stepping up its international growth after signing new overseas partnerships across Central and Eastern Europe.

The Huddersfield headquartered company, which designs and manufactures travel systems, nursery furniture and children’s clothing, said the agreements were part of its long-term ambition to build Mamas & Papas into the “global nursery brand of choice”.

Mamas & Papas, which already sells in multiple European markets, has signed distribution partners and agents in a total of 10 countries, including key markets of Russia, Poland and The Czech Republic. It is also close to singing agreements covering a further five countries in the Balkan Peninsula.

The company, which is exploring similar partnerships in the Far East and Middle East, said it planned to double overseas sales to the region over the next year.

Johan Meyfroidt, International General Manager at Mamas & Papas, said: “There has always been strong overseas demand for British heritage brands like Mamas & Papas and our products have sold successfully in a number of markets for decades. As we step up our global ambitions, we’re exploring multiple routes to market, from distributors and agents to franchisees and licensing partners. What works in Poland may not work in Malaysia, so it’s important we have the agility to tailor our approach to suit local market dynamics.”

Mark Saunders, Chief Executive Officer at Mamas & Papas, added: “Our international strategy is about scaling our presence in new and existing overseas markets at pace but also at low cost, helping us meet increasing global appetite for our design-led products, especially in those territories with increasingly affluent populations. Post-Brexit, it’s important that UK firms think globally about their growth and take full advantage of the enduring appeal of British brands.”

He added: “We’re also continuing to expand our presence in our core UK market, both through our online business and our standalone stores and Next concessions.”

The company recently reported strong trading across its store portfolio and online business following the re-opening of non-essential retail in April.

May 17, 2022
New Products
Enesco is proud to present its brand-new licensed Peter Rabbit Baby Collection.  Having worked closely with Penguin to create the totally exclusive artwork, the new...

May 20, 2022
Issue
Don’t miss out on the latest edition of Nursery Today! Packed with pages of news, views and hot products. IN OUR FEATURES SECTION: we focus...

March 16, 2022
Car Seats
Maxi-Cosi collaborates with eco-living influencer Aly Boghici, AKA @allmumstalk, to help parents build a greener future for their little ones. To mark the launch of the...

September 16, 2021
Feeding
Babymoov launch the next generation Nutribaby ONE (as part of the multi award-winning Nutribaby Food Prep Machine range) - the most intuitive Nutribaby yet...